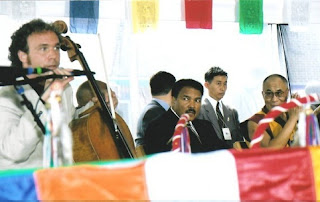 Michael Fitzpatrick with Muhammed Ali, and His Holiness the Dalai Lama
(photo by Tamara R. Fitzpatrick)

I am very pleased to announce our newest advisory board member, Michael Fitzpatrick, an outstanding musician and supporter of meditative traditions. I first heard Michael play during one of the Dalai Lama's visits to the U.S., and his music is amazing.

Fitzpatrick provided the sacred music for the Gethsemani Encounter led by His Holiness the XIVth Dalai Lama involving the world’s monastic leaders from East & West held at the Abbey of Gethsemani, home of the late Thomas Merton. His nine solo performances during the historic 6-day summit were deemed the high point of the Gethsemani Encounter, and led to the invitation to produce COMPASSION, the first East-West recording in history between the traditions of ancient Tibetan Chant and Trappist/Gregorian-Chant. He served as Music Director, featured
Soloist and Executive Producer for the unprecedented musical collaboration recorded and filmed at sacred sites including inside Mammoth Cave, the largest cave in the world, the Abbey of Gethsemani, and the Furnace Mountain Zen Temple.

To learn more about Michael, visit his website at http://web.mac.com/tuningtheplanet/Michael_Fitzpatrick/Home.html, where you can hear samples of his work.

Welcome to the Center for Clinical Mindfulness & Meditation blog